Words made with images

Graphic design made with Photoshop during my studies in the Poitiers school of Fine Arts, based on images I caught on the internet and which I modified. It is the first step in finding the end of studies thematic I chose later, transforming letters, which initially are a way to represent abstract concepts, ideas, when you assemble them into words, into physical caracters, a paradox. Here I did the opposite, giving more meaning to the words I used by making them out of pictures which outlined the context in which I was using them. My aim was not to be illustrative with that system but the opposite, to criticize the way some concepts can become, the first impression a certain word can give, and maybe shouldn't. For example Sauvage (Wild, in French) means to be in a natural state, therefore in a society deeply based on technology like ours it is extremely pejorative - and therefor racist - applied to a human being. It has has been wrongly used to describe cultures which were actually very advanced. That's what I show here through the kind of images I selected to build that word
A3 size.
2001 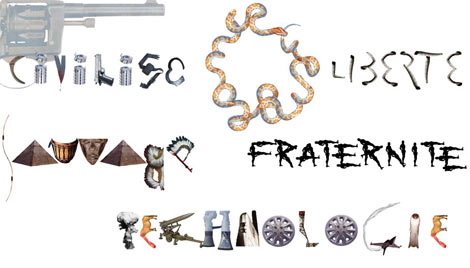